When I applied for the Council of Deans of Health’s Student Leadership Programme, I had absolutely no idea what to expect. I had done the research, and read other reflections by previous participants, but still had little information about how it would impact me, personally. I had never considered myself a ‘leader’, whatever that meant, before this programme. A good team player. A self-motivated person who achieved her BA after 3 years of distance learning, before realising that her true passion lay in the personal connection that is so key to nursing. A student who could direct and receive direction on group projects. But a leader?

That began to change when my academic advisor told me about the CoDH Student Leadership Programme. Through her belief that I would be a good fit for the Programme, and would undoubtedly benefit from the experience, I felt encouraged to apply. In my previous degree, I rarely had in-person contact with my peers. The leadership skills I had begun to develop in secondary school had stagnated, and my confidence in those skills consequently decreased. When I found out I had been successful in my application for #150Leaders, I felt encouraged that my advisor’s confidence in my skills had not been misplaced. 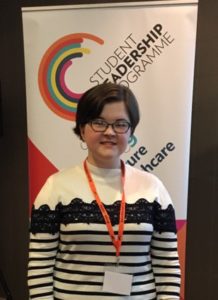 By the time March arrived, and the Programme start with it, I was buzzing with excitement – to meet my fellow cohort, to hear the wonderful speakers (including Stacy Johnson MBE, Joanne Bosanquet MBE, Professor Nigel Harrison, and Adele Nightingale), and to hear the experiences of other student healthcare workers, especially Allied Health Professionals. However, due to unforeseen transportation issues, I arrived three hours late to the conference hotel. Sitting in Lancaster Station, waiting for hours on a southbound train, I didn’t feel much like a leader. I had let my emotions get the better of me, and more than anything I felt like I had somehow failed. Surely that didn’t happen to leaders – surely they were in control, professional, and with a firm handle on their emotions at all times?

That mindset began to change the moment I met the rest of my cohort. You could scour the country for another 50 student nurses and AHPs, and not find a kinder or more encouraging group of young professionals. Talking with them throughout the final event of the day and onwards to the dinner that night, I began to feel at home on the Programme. There was such a wealth of different experiences, and different approaches to leadership – I began to suspect that my assumption about ‘what a leader was’ would be proved wrong by the end of the two-day conference.

I was proved right the next day, receiving talks from Joanne Bosanquet and Adele Nightingale about person-centered leadership and the role of resilience. Points which had previously appeared to be little more than buzzwords were brought to life as they, and all the speakers at the conference, shared their own personal leadership journeys to illustrate their presentations.

Leaving Reading that afternoon, waving goodbye and exchanging contact information with the wonderful cohort I had met there before getting on the train back to Glasgow, I began to reflect on what I had learned over those whirlwind two days. I had seen examples of different leadership styles, and learned about others. I had heard about resilience; the different components of it, and how at times lack of it can provide a valuable opportunity to grow and learn as a leader. And I had learned that failure, far from the stigma associated with it in school, can actually be a valid and vital aspect of growth and leadership.

Now, weeks after that conference and facing possibly the most stressful time to be a student nurse, I can look back and remember what I learned during this stage of the Programme. And this, I think, is the key strength of #150Leaders; that we are student leaders. The strength, encouragement, and validation I have received through this cohort is one of the most valuable takeaways. It’s something I will implement both in my future professional practice, and at the present moment in my practice as a student.